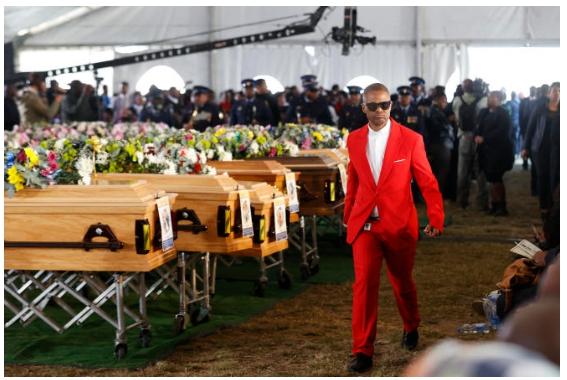 Toxicological tests indicate the presence in the blood of victims of this product, sometimes used in the manufacture of counterfeit alcohol.

After more than three weeks of waiting and rumors, the families of the 21 teenagers who died mysteriously in a bar in East London, South Africa on June 26 may finally have a lead to hold on to. According to the South African authorities, preliminary results of toxicological tests did not reveal a lethal level of alcohol or carbon monoxide poisoning. On the other hand, they indicate the presence in the blood of the victims of methanol, a toxic product sometimes used in the manufacture of counterfeit alcohol.

“We usually find methanol in industrial products. It may be present in very small amounts in alcohol, but not to the same extent as in blood. Now we want to know how much is in there,” said Dr. Lita Matiwane, Deputy Director of the Eastern Cape Health Services, after a press conference on Tuesday, July 19. Authorities are awaiting final test results before confirming possible intoxication, and are giving no indication of the origin of the substance found in the victims.

Colorless methanol is used as a pesticide or solvent in paints, varnishes, and dyes. It is also found in some household products. Highly toxic, it can cause respiratory or heart failure if swallowed or inhaled. It is cheaper than ethanol and is sometimes used in the production of counterfeit alcohol. In the first months of the Covid-19 pandemic, in 2020, about a dozen people died in South Africa from drinking adulterated alcohol.

On June 25, one hundred young people gathered at the Enyobeni tavern in Scenery Park, a suburban East London town on the Indian Ocean. Exams have just ended, it’s vacation time. There was an evening dedicated to the birthday of the DJ. The party announcement has gone viral on social media. Early in the morning, the police found the inanimate bodies of about twenty young people scattered on the ground and tables without visible injuries. Seventeen victims were already dead by that time, four would die in the hospital a little later. The youngest was 13, the oldest 17.

Survivors of the tragedy were treated for headaches, vomiting, chest pains and visual impairments. Symptoms may be related to methanol poisoning. After the tragedy, some survivors also spoke about the panic that arose at the party. The authorities have denied the trace of a deadly stampede caused by the movement of the crowd.

“The blame lies with those who make money off the dreams and futures of young South Africans by selling them illegal alcohol,” President Cyril Ramaphosa said during a July 6 state funeral. The tragedy has shocked South Africans who are calling for more inspections of unofficial taverns. In particular, the villages are full of such tiny bars, which are often not declared. Young people are great customers in a country where two out of three unemployed people are between the ages of 15 and 24.